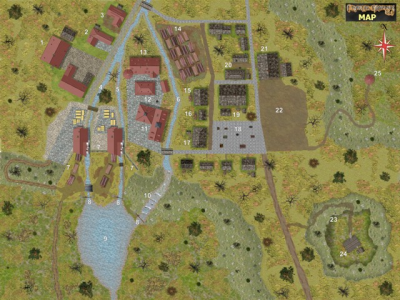 Date Added:
04/12/2021
Downloads:
372
Description:
The Easter weeks seems to be a good time for a resurrection. So, we're resurrecting the Jörðgarð maps.

When we departed upon Christmas vacation in December, we intended to be back in January. However, as I've mentioned in earlier postings, we're a three-man team. One of our members contracted Corona Covid19 about a year ago. The virus infection is long past, but there were some secondary effects that still were healing last year, and they in turn led to their own seconday effects which have impaired the use of his hands to a certain extent, so that he cannot type or steer a mouse well. He's in physical therapy. Both his doctor and his therapist believe the full use of the hands will be restored by summer. But that's down the road yet.

Maps are only a part of our project. We've been running for a year now on 2/3 our normal strength, and as a result, other project priorities have kept us from turning out maps at our old rate, but we're back again for a while now. In addition to mapping our adventures, we also have to write them, and we need a substantial new symbol set for the next segment of our current adventure. This mapping symbol set will, of course, will be available free to FM8 or FM9 users.

So ... maps will keep coming, but there also will be weeks when none are available. As a result, we're not going to call these releases "Maps of the Week" anymore but rather, simly, "Jörðgarð Maps."

Jörðgarð Map No. 458 is from the forthcoming Jörðgarð Trails adventure "A Tale of 2 Books." The PCs' journey through the vampire-ruled North Kingdom continues in the village of Northmill, a sawyer's town. Northmill was ruled by the vampire Count Kazimír until he fled after rebelling against vampire King Vladimir. The count now is a fugitive. His county now is under the provisional rule of Commander Evinka and her subordinate, privisional county steward Maruška, who now oversees the properties of the renegade vampire count.

Key to the Map of Northmill:

1. Kamilova Complex. It consists of a headquarters and barracks building with a woodshed on the north-west side and a combination wagon house and horse stall to the southeast. The station manager is the human male merchant Nikolka. The property and building belong to Count Kazimír. They are rented to the Kamilova.

2. County Wainwright's Shop. This complex also is owned by Count Kazimír. The master wainwright Zbyněček, operates it for the count. The shop makes and repairs the heavy-duty logging wagons used by the woodsmen and it also maintains the wagons used by the Kamilova.

3. County Smithy. The smithy also belongs to the count. The twins, master blacksmith Rudolfek and his sister, master weaponsmith Inka, operate the smithy for the count. Rudolfek repairs metal wares and makes everything from woodsmen's axes and saws, horseshoes and various other metal items to parts for wagons. Inka makes weapons on those rare occasions when one is needed and repairs weapons, mainly those of the militia and the Kamilova.

7. Double Mill with Reinforcing Walls. The mill belongs to the count. It is run by master sawyer Daneček, who lives atop the left sawmill with his wife and family. Daneček employs four journeyman sawyers and three apprentices. The latter have rooms above the right mill.

10. Lazy Rapids. The creek flows down the plateau slope at this point.

11. Garrison. Commander Maruška leads a unit of 30 ducal militiamen. Maruška has moved her own quarters into the count's chambers of the castle.

13. Kazimír's Castle. The county administration is housed here. Commander Maruška has her quarters in the count's chambers.

14. Timber Yard. Timber waiting to be brought to the sawmills is stored here.

17. Tinker Jenda. Jenda and his wife Ivuš are the proverbial jacks of all trades and masters of none. They will try to repair almost anything but make no guarantees of success.

18. Market Square. On a daily basis, the Kamilova has two or three stands here that sell conserved meat and sausage, root crops, grains and other food products that are not particularly perishable. There seldom are more than a few other stands here, sometimes none, particularly in the cold months. Most stands are of craftsmen from the woodlands trying to sell their surplus products to merchants and caravans from elsewhere. Both are rare north of Timbertown. When a distant caravan or merchants travel north of Timbertown, word is spread through the forests, and those who have something to sell travel to the market. Peddlers and travelers who for some reason do not sleep in the inn are allowed to pitch their tents or lay out sleeping bags here.

19. Sylvas Emporium. Sylva offers a wide variety of merchandise needed by the folk of the woodlands and also items sought and needed by the occasional caravans and merchant groups that pass through town, most of whom are heading on beyond Vladimir's Throne to the rich mining area in the kingdom's northwest.

20. Darkland Inn. Anyone traveling to Northmill and beyond should understand that absolutely no food products or crops grow or are produced north of Elmtown … no fresh vegetables, no fresh fruit, no fresh red meat, poultry or fish. When the latter are eaten here, they have been smoked or cured and brought in from the south. The rest of what is eaten here consists of storable root crops that spoil only slowly and grains. Even the beer is brewed with barley, hops and yeast from the south. This applies too to the common room of innkeeper Mořik, who charges nearly twice as much for his limited menu entrées as one would pay elsewhere. This is not price gouging. Mořik must pay the Kamilova substantial fees for transporting food products to the inn. His menu entrées run from 2 to 8 silver pieces. Mořik's guest rooms usually are empty and they are of spartan fare. He has five singles and two doubles with double beds. They cost 6 copper pieces per person per night. If he needs to let the doubles as single occupancy, he still charges the occupant only 6 copper pieces. He is glad for the business. The inn is of unusual design. Sitting benches are along the outer walls with tables in front of them, and here and there are other tables as well. There are two common rooms, but only one is in use at most times. The kitchen is in the middle of the ground floor. There is no table service; one orders and picks up one's food and drink at service windows in the kitchen. Mořik runs the common room and the beer tap. His wife, Bětuška is both brewwife and cook. Their daughter, Jaromira, helps out on busy nights. A local girl, Danuše, is the chambermaid, and she also cleans tables in the common room. On extremely busy nights when both common rooms are open, Mořik hires women from the village to help. Danuše does not solicit after-hours business, but she will negotiate if a good offer is made. In the brewhouse Bětuška brews a bottom-fermented lager that costs 5 copper pieces per pint/half-liter tankard.

21. Teamsters' House. The Evening Hills Teamsters Guild owns the house, which has two stories of open bay beds with wood-burning stoves to provide cold season warmth. The woodland teamsters who bring timber to the mill are the guild members. They sleep here at no cost. The guild also hires house master Servác and his wife Editka to clean and maintain the house. They have a small apartment on the ground floor. Grain as horse fodder is stored in the attic area. Under no condition does the guild allow non-members to sleep here.

22. Wagonyard. This area was set aside as a place for the woodland teamsters to park their wagons and tie their horses.

23. Teapot Moraine. No one remembers how this moraine got its name. It is about 50 feet/15 meters above the surrounding terrain.

24. Nánas House. Nána is an aging human female herbal witch. She pays the Kamilova to import her provisions, both herbal and for her daily needs and to deliver them to the house, which she does not leave. She sees her patients in the house. She lives alone atop the moraine.

25. Nácek's Tower. The tower is 30 feet/9 meters in diameter and 80 feet/24 meters high. It belongs to the va,mpire count's former court wizard, Nácek, who still dwells in it. The tower has no openings and no windows, but there is an observation deck on the top level. Strong magic protects this tower from damage or intrusion.