Log in to your NBOS account to upload files
Rating Submitted
Rating submission failed - please try again. If the problem continues, the feature may be broken.
All Categories > Fractal Mapper > Maps > Fantasy > Overland
Jörðgarð Map of the Week #409 - Hlymdalir's Fortress 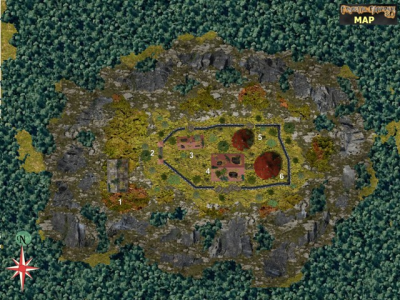 Date Added:
07/02/2019
Downloads:
572
Description:
Map of the Week No. 409 is from the forthcoming Jörðgarð Trails adventure "A Tale of 2 Books." During the adventure, the PCs have the delicate mission of seeking out the ruins of Hlymdalir's Fortress in the Greenwood. In an isolated area atop a stone outcropping hidden by trees, the fortress ruin is difficult to find. The PCs seek a coven of draugs (undead) whose bindings to the Darkness have been broken and who now dwell hidden in the fortress ruins. The PCs are to negotiate with the draugs, agreeing that the Northern Circle will leave the draugs in peace if they give the PCs critically needed information. Only one of these draugs, a female named Líndis, reveals herself to the PCs.

1. Hunter's House. This relatively simple house belonged to the fortress' hunter before the falle of the Æsir Empire. It is the one building on the surface that is in relatively good condition. Líndis uses it as base.

2. Fortress Gate. The gatehouse once had a formidable wooden gate. It is gone. One simply can walk in.

3. Stable. The interior is gone. Weeds grow on the floor.

4. Castle. Most of the upper floor and the stairway that led to it have caved in. Weeds and young trees grow in the ground floor. One tree grows up through a hole in the roof. The second story bridge from the castle to the keep is in tatters.

5. Necromancer's Tower. The Æsir era necromancer Vit used this as his mage's tower. It is a ruin now. The top floor still is mostly intact, but there is no ladder or stairs with which to reach it.

6. Keep. The floors and stairway have caved in.

1. The Fractal Mapper (TM) 8 version in FMP format (14 MB) from the Jörðgarð website.