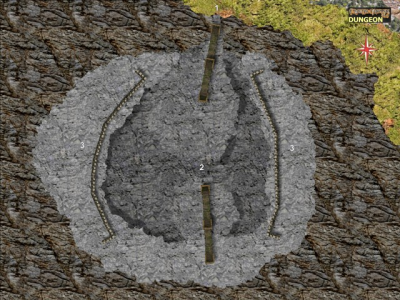 Date Added:
12/23/2018
Downloads:
669
Description:
With this week's map, the Vintyri Project abandons the ship for our annual Christmas vacation. We'll be back on board with Map No.385 on January 13. We wish you all a Merry Christmas and a Happy New Year!

Map of the Week No. 384 is from the forthcoming Jörðgarð Trails adventure "A Tale of 2 Books." This week we take our first look at the detached dungeon complex north of the fortress castle.

The dungeon complex comprises several hidden caves but only one of them will lead the PCs to their goal. The Endless Darknesscavern seen this week is not the PCs' real target but a source of trouble instead. It is the underground haven that was created for the lesser draugs and the ogress of the fortress. The entrance is a well-fashioned, secret, stone door in the face of the cliff. Only a dwarf or a stonemason would be able to spot its seam. However, neither a dwarf nor a stonemason would be able to open the door. It is magically sealed and opens only upon the command word, which is the same as the name of the dungeon in the old tongue - Endalaus Myrkvi. The seal is the magic of the fallen high draug Martröð.

A second unusual facet of the dungeon is that its ceiling and walls are covered with a 1-foot/30-cm thick netting of lead. This makes it impossible for spells of divination or other magic to find or penetrate the dungeon, but it also is a weak point of the dungeon under certain circumstances, because no magic can be cast into it. However, spellcasters can teleport to known locations within the dungeon under the leaden net. That includes PCs.

Key to the Dungeon Plan;)

2. Lowest Point of the Dungeon.

You can get this floor plan in two versions: