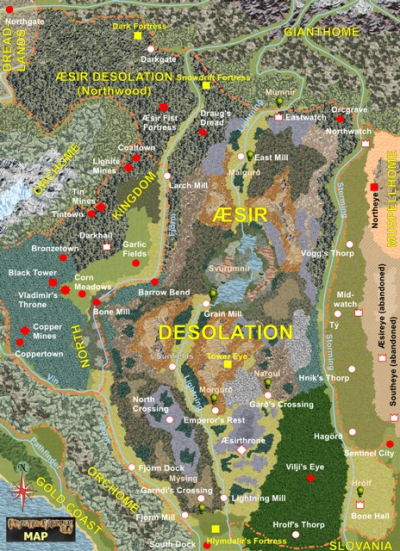 Date Added:
04/08/2018
Downloads:
807
Description:
Map of the Week No. 347 is the first entry from the forthcoming Jörðgarð Trails adventure "A Tale of 2 Books." This is the fourth of a serires of five continuous adventures on the Fallen Empire Trail. In the third adventure, "In the Salt Mine," the PCs found the important but utterly evil Red Book of Martröð. They now are seeking the even more nefarious Black Book of Martröð.

In the third adventure, the PCs destroyed the old Æsir salt mine and a demon's dungeon beneath it. In the process, they also permanently destroyed the true bodies of a number of red draugs (an undead type) that had served some of the nine powerful dark draugs who are the epitome of evil in the Fallen Æsir Empire. The nine do not know who or what destroyed these red draugs, and they are in something of a state of panic as a result. They suspect above all one another. As a result, one of the nine fled to a new location. In addition, the Red Book has revealed some important new locations.

Today's Map of the Week is the first map in the new adventure. It is an update of an earlier map by the blue druid of the Northern Circle who also made the earlier version.