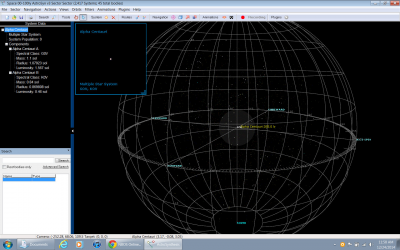 Date Added:
12/12/2014
Downloads:
1497
Description:
This is just the full 100ly-radius AstroSyn sector map from my Space series of files, but now converted to version 3 format. It's all ready to go, no importing or converting needed, and the data from the spreadsheet files is loaded into the Notes section of a star's properties. It's unzipped for your convenience.

See the description for "Space 100 ly Fileset Package" for all the details of this sector map/star data/universe-building project. In short, this is a "real space" star map intended for fictional purpses, with the stars out to 100 light years from Sol (with a nominal absolute magnitude cutoff of 9.5 beyond 20 ly, but there are some exceptions) made all orderly and standardized and predictable, perfect for building a science fiction universe upon.

In particular, main-sequence stars of spectral type F through M have had their masses standardized into a regular progression and will vary by various amounts from reality. This is so, for example, a G2V star will always have a solar-type mass and luminosity (unless it's a subgiant, which is a very old star) and so will be just like our sun, with habitable planets. If you want to stay true to reality, you'll only use the HabCat stars, which have been indicated in the data, to place habitable planets (see the other file for a description of the HabCat stars)

The sector map also includes Sol at coordinates 0,0,0 and galactic "compass" markers (Coreward, Rimward, Spinward, Anti-Spin, North, South). The sector shape is spherical (120ly radius, with stars going out to 100 ly) with a spherical grid. The inner gray-shaded spherical zone is my 20ly-radius "Core" area, corresponding to my Space 20ly .csv file, and contains almost all the known stars out to that distance.

The standard heliocentric galactic coordinates (i.e. sun-centered, with 0 degree galactic longitude being the direction of the center of the galaxy) for the stars have been preserved in AstroSyn's non-standard format, so they're oriented just like in reality. So, when at Sol and facing Coreward (the +X axis), it will be "into" your monitor/screen and Rimward (-X) will be "out" of your screen; North (+Z) will be "up" from the galactic disc and South (-Z) "down".

In the thumbnail image I have Alpha Centauri selected in a zoomed-out view of most of the sector map. It might be hard to tell, but note that the system is named "Alpha Centauri" (not the Hipparcos number or such) and is properly formatted into A and B components. ALL the "true" multiple star systems (i.e. ones in which the components orbit each other, and not widely-separated common proper motion pairs) are formatted like that; it took a lot of work to do, which I suspect was why it wasn't done in the other star data files here. Fortunately I came up with a simple way to automate the creating ID numbers and system type labels for use in the AstroSyn .csv files, saving me from having to do that.

Oh, and since this was originally created for v2 of AstroSyn, muliple star systems won't have their orbits shown.

The formatting on the data in the Notes section will probably be a little messed up due to varying screen resolutions (variable-width fonts are a pain sometimes), but it's still readable, just with some odd spacing. I'll fix it sometime, probably when I get around to finish updating the star files (after I had uploaded the original files, I then went back and started to revise them, correcting errors, oddities and other minor things that I decided to do a little bit differently).


Oh yes, it's only out to 100 ly since that was my first phase target distance. I had planned to continue past 100 ly, but the number of stars begins to rapidly increase the farther out you go (this becomes apparent even at 90 ly), and I needed a break. I didn't just copy data from the Hipparcos catalog, I researched each and every star (using various sources as noted in the full description) to compare the data and selected what I thought was the most "correct" or best-fitting. That took a long time, especially when it came to oddball stars (like sub-dwarfs and sub-giants) and complicated multiples, not to mention the swarm of red dwarfs that are out there (that's why I cut out most of the smallest ones). I do intend to continue this project, when I can find the time to spend on it.

Here's a list of what data is included in the Notes section for each star. Not all stars will have all the fields filled in.

1) Main Display Name; This is usually what the star is most known as or called, which could be a proper name (only if commonly used, obscure ones were ignored in favor of more familiar designations), Bayer letter, Flamsteed number or other primary catalog number (for example, many variable stars use their variable star catalog designation, like DX Cancri).

2) Alternate Name; This is usually what the star is next most commonly known as, and can be an obscure proper name, Bayer+Flamsteed designation, or some other catalog number (some of which are pretty obscure themselves).

4) Gliese Number; This is the Gliese catalog number, includes GL, GJ and sometimes Wo. In some cases I used the old "NN" designation.

5) Four different catalog numbers under which the star is known, if there are any; they are the Hipparcos (HIP), Henry Draper (HD), Hoffleit Bright Star (HR) and Bonner Durchmusterung (BD) catalogs.

6) Spectral Class; This is my calculated standardized spectral class for most of the stars, everything else (giants, class-A and above stars, oddballs, etc.) uses the actual spectral type. A "w" indicates a white dwarf, and for the odd subdwarf, an "E" is used instead of "VI" to indicate the equivalent spectral type if the star wasn't a subdwarf.

8) Absolute Visual Magnitude (M), this one I calculated from V using the standard formula. Note, our Sun has an M of 4.85, which is useful to figure out if an unknown star is actually like our Sun or close to it.

9) The B-V value or color index; Usually the best-fitting actual value though sometimes I modified it to suit my purposes.

10) Mass; This is my calculated stellar mass value for most stars, and incorporates a built-in bolometric correction for type "V" stars of spectral class G8 and lower. For non-dwarf stars and other oddballs I manually used a mass value that came close to reality.

11) Distance In Light Years; This the calculated distance from the Sun in light years, using the best and most precise parallaxes available; these were usually from the HYG catalog, but for the nearer stars I also used ones from the RECONS website.

12) Luminosity; This is a calculated stellar luminosity using the standard mass-based formula, and for stars of class G8 and lower it incorporates my own own custom bolometric correction value, based on my best estimates. The bolometric luminosity is important when dealing with K-type stars and red dwarfs, since as stars get smaller in mass they output a larger portion of their energy as infrared radiation--need to take it into account when ceating a planet around a small-mass star.

13) The next four data columns are the calculated bolometric habitable zone (HZ, it's the "center line" distance, where the solar equivaent energy output is found) in astronomical units , the orbital period of a planet at that distance both in years and days (Per @ HZ), and the tidal force exerted on a planet at the HZ distance (if it gets too high the planet will have a tidally-locked rotation).

14) Category; This is what "category" I put the star in and is used for searches. The categories are HabCat for HabCat stars, PlusCat for my own habitable planet candidate "additions" (these ignore a lot of factors that the HabCat takes into account, and so are probably not realistic in many cases, but since this is for fictional use I didn't care), and NHC for everything else that isn't capable of having habitable planets. "MPL" means a multiple star.

15) Tier; this is the "tier" I put the stars of spectral type F6 and lower in . It's based on the parameters of my SF universe, and is also used for searches as well as for determining display color. It's what I use to group stars according to value and desirability; Tier 1 is the best group, while red dwarfs are divided into two sub-groups under Tier 4. "N" in the Tier designation means a star not capable of hosting a habitable planet, i.e a "NHC" cat type and not one of the HabCat or my PlusCat stars.