Log in to your NBOS account to upload files
Rating Submitted
Rating submission failed - please try again. If the problem continues, the feature may be broken.
All Categories > Fractal Mapper > Maps > Fantasy > Overland
Jörðgarð Maps No. 476 - þingúl's Escape No. 2 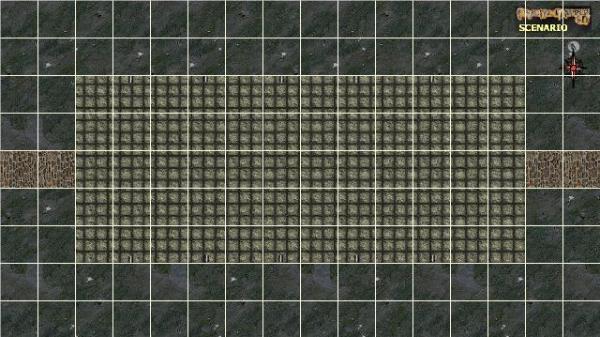 Date Added:
01/15/2022
Downloads:
103
Description:
Joerdhgardh Map No. 476 is from the recently released Joerdhgardh Trails adventure A Tale of 2 Books. The PCs' journey through the vampire-ruled North Kingdom nears its end as the PCs explore the dungeon of the Darkhall, the castle of the former dark draug (undead) Thingul. The PCs have reached the end of the dungeon and now are searching Thingul's escape route. The second barrier is a dwarven-built gas trap chamber.

The dwarves who built this chamber trapped the room deviously. There is a seam around each of the floor tiles, suggesting that all of them are pressure plates. However, that is not the case. In the first two 5-foot/150-cm rows of tiles to the left and right of the map, each of the tiles is a pressure plate. As long as someone is standing on any one of the pressure plates in these 10-foot/3-meter zones, nothing will happen.

Farther inside the room, beyond the 10-foot/3-meter zones, one tile in each group of nine is a pressure plate. If no one is standing in either of the 10-foot/3-meter zones and a PC steps on a pressure plate in the middle part of the room, the trap will be triggered. It takes only one PC to trigger the entire trap. Each time a PC moves from one 5-foot/150-cm square within the battlemap grids to another, there is a 10% chance (1 on d10) that he or she steps on a trapped trigger plate.

If the trap is triggered, metal doors weighing 1,000 pounds/455 kg each fall at the two entrances, sealing them. Gas then will begin to pour out of the pipes on the side walls. The gas will cause these effects:

You can get this battlemap in two versions:

Both versions are released for personal and commercial use under the Open Game License Version 1.0a, which you can read on the Joerdhgardh website at: