Log in to your NBOS account to upload files
Rating Submitted
Rating submission failed - please try again. If the problem continues, the feature may be broken.
All Categories > Fractal Mapper > Maps > Fantasy > Overland
Jörðgarð Maps No. 465 - City of Vladimir's Throne 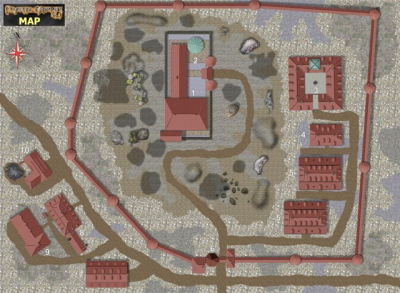 Date Added:
07/08/2021
Downloads:
317
Description:
Jörðgarð Map No. 465 is from the forthcoming Jörðgarð Trails adventure "A Tale of 2 Books." The PCs' journey through the vampire-ruled North Kingdom reaches the "city" of Vladimir's Throne, the seat of the reclusive vampire king Vladimir. Vladimir's Throne is a city only because the king proclaimed it as such; it really is barely a village. There is little sign of life here. Vladimir's Throne still is under the Dark death aura of the fallen high draug, Martröð.

Key to Map of Vladimir's Throne

1. King Vladimir's High Fortress. The king, his staff and the government administration occupy all the complex except the tower (Location No. 2). Vladimir, Ignác, Věnceslav and Radana dwell in the castle complex. The other servants live in the housing units inside the wall (Locations numbered 5). Only Vladimir, Ignác, Věnceslav and Radana are allowed to enter the dungeon. Its entrance is well guarded by human soldiers and magi.

2. Mstislav's Black Tower. No longer is anything known to dwell in the tower. However, out of fear of magical traps that Mstislav might have left behind, no one enters it. It no longer is guarded.

3. Royal Military Garrison. The garrison is the base of 220 elite human soldiers and war magi who are in service to and under the direct command of the king.

4. Royal Emporium. This large store is one of the biggest in the kingdom, and it certainly has the finest selection of all. Those who dwell in Vladimir's Throne are the king's most valued and trusted servants, and they are rewarded well. Most things that people might want to buy are available here or can be ordered. Kamilova caravans bring the goods to the village. The king's merchants also have the first chance to buy any foreign wares that arrive in Královrata.

5. Royal Housing. Each of these fortress-like stone buildings is five stories high with eight luxurious (by North Kingdom standards) apartments per story. Almost all residents of Vladimir's Throne live in this complex.

6. Royal City Gatehouse. Only true residents of Vladimirs Throne and those who have special passes are allowed entry at the gate.

7. Royal Warehouse. When royal caravans arrive, they bring their wares here. Caravans are not allowed to pass the outer gate. Most goods in the warehouse are intended for the emporium (Location No. 4).

8. King's Inn and 9. The Inn's Stable. The inn has a large public house that is frequented not only by traveling visitors but also by those who live in and outside of the wall. On the southeast side of the inn is its brewhouse, where its lager beer is brewed. The inn's guest rooms and stable usually are used only by trade caravans that are bringing goods to the castle or that are spending a night while traveling on to market towns.

10. Royal Smithy. The master smith Zdeňka, a human female, runs the smithy, which is property of the crown. The smithy manufactures nothing except occasional small replacement parts. It is responsible not only for repairing metal items of the local folk and passing caravans but also for maintaining the weapons, armor and metal equipment of the military garrison.